What is an Eccentric Exercise, and Why Does My Physiotherapist Keep Giving them to Me?? 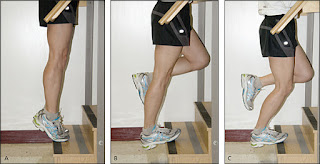 An eccentric strengthening exercise, sometimes referred to as a negative, is defined as an exercise where the muscle is lengthening under a load. This is most often the lowering portion of the exercise. People working on strength training will sometimes use eccentric exercises with a weight that is currently too heavy for the entire exercise to push past a plateau.

Physiotherapists prescribe eccentric exercises to promote healing of tendons and tendon insertions. In fact eccentric strengthening is far and away the most supported treatment for tendon repair. Eccentric exercises were first shown to be effective in a 1998 Swedish study on Achilles tendinopathy, and is now the gold standard for treatment as its efficacy has been repeated in a number of other studies since. The exercise protocol used in the original study included the lowering portion of a calf raise being done on one foot and the raising done by both legs. 10-15 repetitions of the exercise were performed twice a day, over a step and even if there was pain involved (unless it was debilitating). They were also done in both the straight leg (B) as well as the bent leg positions (C). It was a twelve week program. Weight was added to the exercises when the exercises were completely pain free. The results were remarkable as 100% of the subjects assigned to the eccentric program were able to return to pre-injury activity levels at the end of the program and their pain as measured by visual analogue scale (VAS) decreased from 81.2 to 4.8 (± 6.5) out of 100!

The exact mechanism of eccentric strengthening has yet to be elucidated but it has been shown that these exercises improve the quality of tendon structure.

Examples of using this type of exercise for other types of tendon or insertional tendinopathies are as follows:
You get the idea.

So now you know why eccentric exercises are pushed by your physiotherapist... and why you should do them!!

Posted by Rebecca Chambers at 8:05 PM

Rebecca Chambers
Rebecca has been a physiotherapist since 1998, practicing in various sport medicine clinics throughout the GTA. She completed her BSc (PT) at the University of Toronto and prior to that completed a MSc in Exercise and Health Science at York University. She has also completed post graduate course work in manual therapy, acupuncture, shoulder injuries as well as golf and running sports specific injuries.